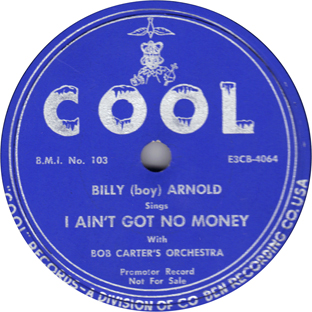 From the collection of George Paulus

Revision note:With the rediscovery of a solitary ad in Cash Box (September 19, 1953), Dan Kochakian has doubled Cool's known output (from 4 sides to 8). However, the 4 "new" sides that were announced in that ad were never released, so far as we can determine. And a 2017 CD release finally includes both Billy Boy Arnold tracks from Cool, as does a 2018 CD titled Windy City Dandies. Our thanks to Bob Eagle for a biographical sketch on the label's co-owner, Collenane Cosey; to Steve Cushing for more about Mrs. Cosey; to Dave Penny, Mark Sinclair Harris, and Stefan Wirz for help with the (very sparse) reissues—and to Dr. Robert Stallworth for a scan of a real live Cool 45.

Cool was among the very tiniest of Chicago independents. It was in business for less than a year, maybe for just four months. It was responsible for just one recording session, two releases, and two prospective releases that never got past the announcement stage. It nonetheless helped to launch the career of harmonica-playing bluesman Billy Boy Arnold.

Cool opened for business in the summer of 1953. It was in business from roughly June 1953 to October of that year. It was described, on the labels and in both surviving advertisements, as a division of Co-Ben Recording. Co-Ben was a partnership between Collenane Cosey, whose name appers twice in the composer credits, and Charlie Bennett, who, according to Steve Cushing, was her brother-in-law, and was also a Cool artist. The address was given as 1231 South Homan Avenue.

Collenane G. Cosey was born Collenane Clark in Illinois (most likely in Chicago, but confirmation would be nice) on November 12, 1909. She was the daughter of Palus and Maggie Clark, and in the 1910 and 1920 censuses was listed as residing at 2130 Fulton Street. In 1930, a "Coleman Clark," occupatiion "Decorator," was listed as living with brothers and sisters at 2126 Maypole Avenue; Bob Eagle thinks, plausibly, that "Coleman" was a garbling of Collenane. In 1943, she was credited, with Louis Jordan and her husband, Antonio Cosey, of "Ration Blues," which Jordan recorded in October (it was released on Decca 8654). She also wrote "Bonus Pay," which was recorded by Eddie "Cleanhead" Vinson. 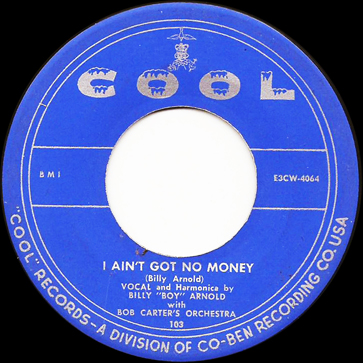 From the collection of Dr. Robert Stallworth

Cool employed the mastering and pressing services of RCA Victor, as can be discerned from the matrix numbers. Maybe also the RCA Victor studio on Navy Pier... though we lack documentation on this.

Although the four released sides have consecutive matrix numbers, which suggest that they were recorded at the same session with the same studio band, there were two different headliners, so for clarity we have divided the listings by headliner. The two releases that didn't materialize were by Herbert Beard (sides now placed with those that were released) and Charlie Bennett (now given their own entry). 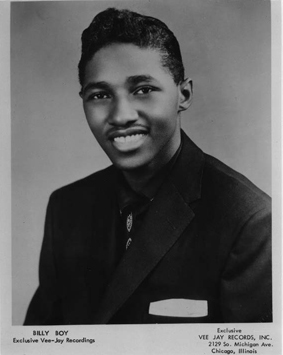 Bluesman Billy Boy Arnold was born William Arnold on September 16, 1935, in Chicago. His first public performances were on 47th Street with Bo Diddley’s street band, in which he played harmonica. When Co-Ben picked him up, he had not yet turned 18. Cosey and partner must have considered Bo Diddley's electric guitar and Jerome Green's maracas too rough and ready for the kind of recording session they had in mind, because the they recorded Arnold with the suaver backing of Bob Carter's combo. "Hello Stranger" finds him trying to sound like a cross between John Lee Williamson (in the harmonica into, solo, and second verse) and Grant Jones, who recorded a number with the same title and a similar first verse for United in October 1952. In fact, Grant Jones' "Hello Stranger" was written by Sennabelle Richie Fenner, another Chicago-based female composer of blues. The Cool version is credited to Billy Boy Arnold, but we know better.

The Billy Boy Arnold sides appear to have been recorded first but released second, on Cool 103. In the RCA Victor matrix series, E3 stands for 1953. The CB matrix number appears on the 78 and the CW on the (even more insanely rare) 45, which for some reason ended up with more detailed label copy.

Red Lightnin RL 0012 was a British LP, issued in 1975 under the title Billy Boy Arnold: Blow the Back Off It. "Hello Stranger" was transferred from a, well, less than pristine copy of Cool 103. The other tracks on the LP consisted of 2 unreleased Arnold sides from Chess and most of his output for Vee-Jay. See http://www.wirz.de/music/redlifrm.htm for a Red Lightnin discography.

In 2017, both Billy Boy Arnold sides were included in a 5-CD box set, Down Home Chicago Blues: Fine Boogie. 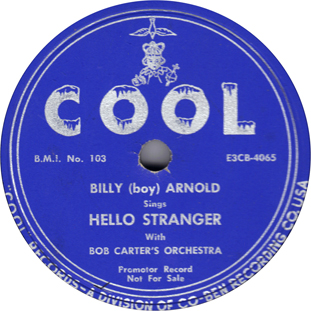 From the collection of George Paulus

From the collection of Dr. Robert Stallworth

The Cool single came and went. Arnold's next recording opportunity arrived when Leonard Chess finally showed some interest in Bo Diddley. He actually cut two of his own numbers at the end of the first Bo Diddley session for Chess, in February 1955, but Leonard Chess did not seem interested in releasing them. So Arnold went across the street to Vee-Jay, which signed him in May 1955. At his first session for his new label, he recorded his breakthrough number, "I Wish You Would," whose family resemblance to "Diddley Daddy" did it no harm. 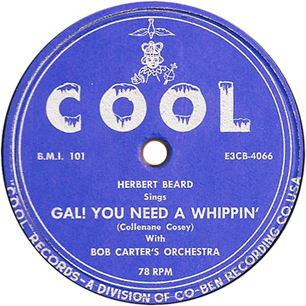 Who Herbert Beard was, we have no idea. But he cut four sides for Cool. His single was released first, as Cool 101/102. Either Co-Ben wasn't quite accustomed to the release number concept, or four Herb Beard sides were recorded and the originally intended pairings were switched at the last minute. Pairings could have been switched because Cool announced a second "Herb" Beard single, but, to our knowledge, never released it. We have put the other two Beard tracks here, as the likelihood is pretty remote of the label paying for more sessions.

"Gal! You Need a Whippin'" was reissued in 2003 on an Electro-Fi CD, a various-artists compilation from Canada titled Midnite Blues Party Volume Two: Rare Blues and Rhythm & Blues from the 1940's & 1950's. 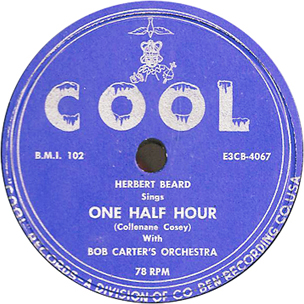 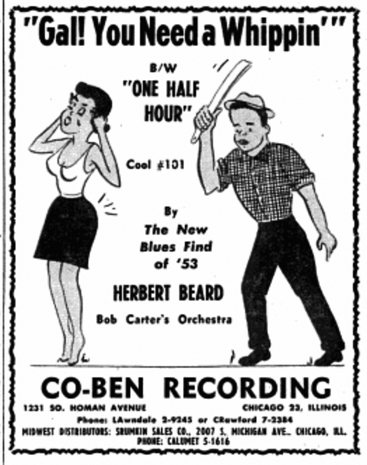 Cool 101, as it was billed there, was the focus of the company's only ad in Billboard, which appeared on July 11, 1953 (p. 39). Its theme of cartoon domestic violence is unlikely to have appealed to most readers, and it seems to have prompted no further attention from the trade magazine.

Courtesy of Dan Kochakian we recently learned of a second ad for Cool, which appeared in Cash Box on September 19, 1953 (p. 18). Mercifully free of illustrations, it appends to Cool 101/102 (now called 102) and Cool 1003 "2 Sensational New Releases," for which artists and titles are provided but no numbers. Herbert Beard was due for a second single with "Luxury Tax Blues" and "Rhythm in My Soul" as the titles. McGrath's R&B Indies (2nd edition, Vol. 1) puts the two titles that we know as Cool 101/102 on Cool 101, then ascribes two further Herbert Beard titles (without matrix numbers) to Cool 102. McGrath says they were "Luxury Tax Blues" and "Oh Rhythm." "Luxury Tax" is a number that Collenane Cosey claimed to have written for Eddie "Cleanhead" Vinson, but it is credited on the original release to Vinson and Jessie Mae Robinson. McGrath also turns "One Half Hour" into "One Half Pint"; wherever his information came from, it wasn't directly from the Cash Box ad..

The Cash Box ad also promised a single by "Charley" Bennett, "Half Past Three" b/w "Zig Zag in Love." This wasn't mentioned again by McGrathÑor, to our present knowlegeÑby anyone else. We're assuming that Charlie Bennett sang on them, but we don't even know that.

Our entire knowledge of these sides is taken from one ad in Cash Box (September 19, 1953, p. 19). The ad probably marks the end of Cool and Co-Ben's effort to stay in business. It's plausible that Charlie Bennett's sides were done at the same session as the two by Billy Boy and the four by Herbert Beard, but there is little to go on here. 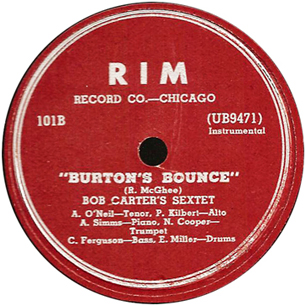 One of several unanswered questions about Co-Ben and Cool is who Bob Carter was. There've been a lot of musicians named Bob Carter, and more than one of them spent time in Chicago. We are reasonably sure that this Bob Carter previously led a sextet in 1949, for another minuscule operation called Rim—it produced three vocal sides for singer Rudy Richardson and one instrumental, which appeared as Rim 100 and 101. We don't know what instrument this Bob Carter played, but he wasn't the Bob Carter who recorded for Specialty and Sunbeam. That Bob Carter (full name Robert James Carter) played bass; this Bob Carter employed Curtis Ferguson to handle the instrument on the Rim session. There was also a piano-playing Bob Carter around Chicago at the time. 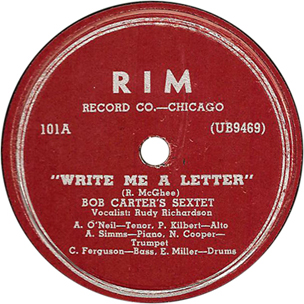 As the solitary Billboard ad indicated, with just one Chicago-based distributor, the company wasn't going to move its product to any distant locales. After the two releases, both in July 1953, and the fizzled announcement in September heralding records that never arrived, nothing more was heard of Co-Ben or Cool. The company probably exhausted its capital recording and mastering 8 sides and pressing and releasing 4 of them. Collenane Cosey retained her connection with Louis Jordan, who recorded his own version of "Gal, You Need a Whippin'" in January 1954, during a whirlwind series of sessions that took place immediately after he left Decca for Aladdin. It was released in February 1955 on Aladdin 3279 (see the review in Cash Box, February 26, 1955, p. 32, and an advertisement for the record in Cash Box for April 2, 1955, p. 69). By then, Cool had gone out of business.

The fate of the masters is unknown. The two Herbert Beards and the two Charlie Bennetts, announced but not released, have flown we know not where. The label's output has drawn little by way of reissue attention. One Billy Boy Arnold side was reissued on a Red Lightnin LP in 1975. Both finally made it, in much better sound, onto a 5-CD boxed set of Chicago blues in 2017 and a single CD from 2018 titled Windy City Dandies. One Herbert Beard side came out in 2003 in a various-artists compilation CD on the Electro-Fi label, and on the Windy City Dandies collection.

After Cool closed, Collenane Cosey moved to Phoenix, Arizona. In 1956, she was operating Top Hat Cleaners at 533 East Jefferson; her son Pete spent his teenage years in Phoenix. She returned to Chicago at an unknown date, living at 909 West Foster Avenue. In the early 1970s, she ran a child care center that she made available after hours to the Association for the Advancement of Creative Musicians, which used the space for music classes and rehearsals. Collenane Cosey died on September 3, 2010, at the age of 100.

Cool is a kind of obvious name for a record label. According to McGrath, the Chicago-based operation was the first R&B-oriented company to use it, but others would follow: a fairly prolific Cool label out of Harrison, New Jersey, was active from 1958 to 1961; a doo-wop Cool label of uncertain location, from 1960; another blues label from Chicago in the 1960s. To these Bob Eagle adds the Miami-based label of one Dr. Cool, in the 1970s.

Our thanks to the late George Paulus, to Bill Sabis, and to Dr. Robert Stallworth for photos of some extremely rare records, to Bob Eagle for his biographical research, and to Dave Penny for help with the very sparse reissues as well as the composer credits on two tunes Collenane Cosey told Steve Cushing she had written for Cleanhead Vinson.